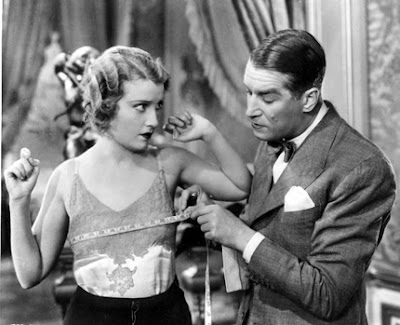 Ever since the Siren's great post about film fashion, I've been itching to post my own list of my favorite movie costumes.  I make no claims to being a knowledgeable fashion blogger (psst, go visit The Silver Screen Modiste's excellent blog). This is just for my own personal enjoyment, a way for me to talk about how much I enjoy costume on film. Rather than try to fit all my favorites into one epic post, I decided to make it a regular series on this blog. That way, I can be as slapdash as I like, without fretting over what I've missed.

However, in order to make the lists more interesting, I gave myself three restrictions:
With that said, here are a few of my personal favorites. 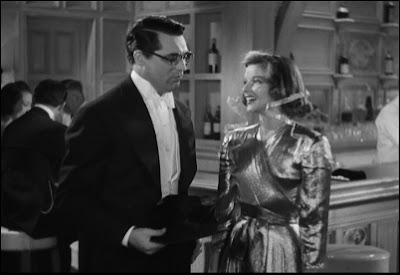 Of course, everyone remembers the scene where this dress gets ripped, but what about the brilliance of the dress itself? In many ways, it's the epitome of 1930s elegance, gold lamé, floor-length, hugging Hepburn's form beautifully. But it's also completely ridiculous. Look at the way that ribbon appears to float around Hepburn's head. It's like the costume equivalent of someone drawing circles around her head as if to say, "Yeah, this dame's completely dizzy." And watch how Hepburn moves in it. She doesn't mince or pose, she strides. She has total confidence. She's comfortable in this dress. Which makes it all the funnier when she has to shuffle out with Cary Grant blocking the view of her ass. Still, it's a perfect example of a costume that gives you the entire character in one moment. Beautiful, cuckoo-crazy Susan Vance. Bless her. 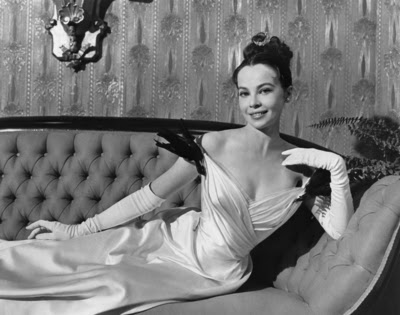 Cecil Beaton won an Oscar for his work on Gigi and deservedly so. The film's climax is a classic moment of the awkward girl suddenly revealed as the beautiful woman and it still packs a punch. The film builds us up to it gradually, we begin to see Leslie Caron in longer dresses, higher collars. But her costumes are still pretty demure and girlish until the moment when she enters wearing this. Forget "Thank Heaven for Little Girls," forget the title song, it's this dress that shows us how girls can grow up.
3. Barbara Rush in Bigger than Life
Executive Wardrobe Design by Charles Le Maire, Costume Design by Mary Wills
("The Orange Dress")

I'm convinced that Alfred Hitchcock was somewhere in the theater for Bigger than Life taking notes for Vertigo. In one queasily brilliant scene, James Mason's character, Ed Avery, is fully in the grips of a manic episode brought on by cortisone, and insists on dragging his wife Lou (Barbara Rush) through the most expensive dress store in town. His act of generosity becomes one of ruthless control, as he forces his reluctant wife to take home far more dresses than she wants. The only one she does want is this orange number that reappears to great effect in the film's finale. And what a dress it is. It's shockingly bright, like a flashing neon sign in the couple's cramped suburban home. It's a sophisticated style, but it overwhelms poor Lou. The flaring collar, the swirling skirt, the stiff material--it's like the dress is choking her. Her character may be suffering in silence but there's nothing silent about that dress.

4. Gene Tierney in The Ghost and Mrs Muir
Costume Design for Gene Tierney by Oleg Cassini
("The White Beach Dress") 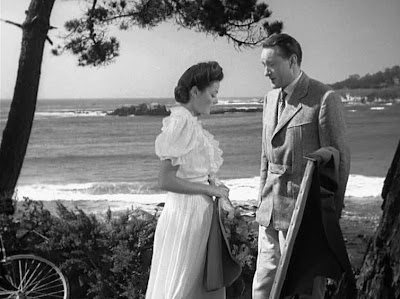 Gene Tierney's parents tried pretty near every trick in the book to stop her from marrying dress designer Oleg Cassini. But Tierney's movies prove that, in one respect at least, Cassini was a savvy choice. Because damn if that man didn't know how to dress his wife. It didn't matter whether she was in contemporary or period fashion, Tierney still looked great. While The Ghost and Mrs. Muir isn't her most dramatic onscreen look (she is supposed to be playing a poor widow at the turn of the century), it shows the progression of her character just perfectly. In the first few scenes, the widowed Mrs. Muir is swathed in black. Then, as her character begins to feel freer and more confident, she progresses to lighter colors and patterns. But when Mrs. Muir suddenly appears at the film's midpoint in this floaty white beach dress, the breeze ruffling her hair and brushing her bare arms, it's a striking moment of a character's romantic yearnings come to visual life. Her movements are looser and as Bernard Hermann's dreamy score follows her up the road, she looks like she's in a fairy tale. And when she meets George Sanders on that road and begins to fall for his charm, it feels inevitable. No woman could wear that dress, looking like Tierney does, and not feel romantic.
5. Norma Shearer and Herbert Marshall in Riptide
Costume Design by Adrian
("The Insect Man and Lady Skybug Costumes") 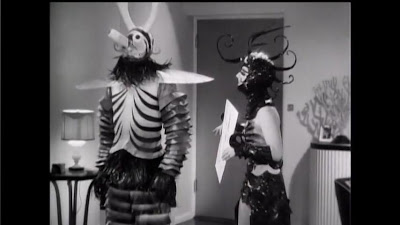 Okay, I'll admit it, I haven't actually seen this movie, other than the brilliant opening sequence posted on Youtube. But c'mon. Are these not the most fantastic costumes in the history of Meet Cutes? When an Insect Man meets a Lady Skybug, what else can they do but fall in love?


Note: The Bigger than Life screencap is credited to Brandon's Movie Memory and the Ghost and Mrs. Muir one was taken from This Island Rod.
Posted by Aubyn at 2:30 PM