"I think it would be fun to run a newspaper..." 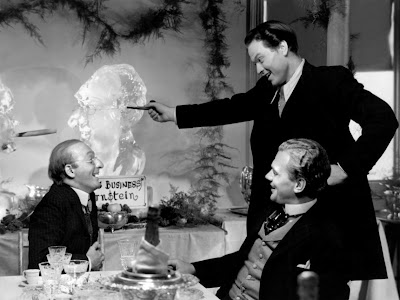 I'm no Charles Foster Kane, nor do I own a newspaper, but I come bearing blog-relevant news. The weather may be getting colder, but it looks like the blogosphere will be heating up in the next few months with some promising new events. Orson Welles is almost as excited as I am. (P.S. It did take me a few extra minutes to realize he's brandishing a pipe in that still, not a gun.) 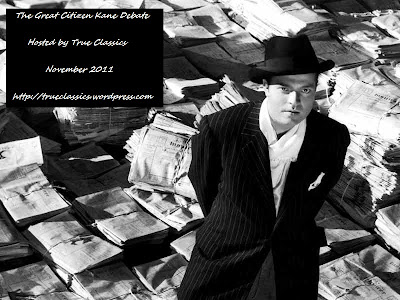 
"Here’s your chance to either defend Kane’s position as King of the Cinematic Mountain, or to knock it off its storied pedestal. At some point during the next month (until November 13th), put up a post on your blog either explaining why Kane deserves to be numero uno, or lay out your reasons why it is overrated. And if you are among those who feel that Kane is not the best movie of all time, tell us which film really IS, in your opinion, and defend your choice!

The entries will be judged by Carrie, Nikki, myself, and a couple of guest judges whom we haven’t determined yet. We’ll be looking at several factors, but first and foremost, we’re looking for enthusiastic, informative, and entertaining entries that will engage us–and your readers–in lively discussion. And we will award prizes to our top three favorites entries!"

I knew I was committed to this contest before I even finished reading the rules. It's a debate about Citizen Kane! The film for which my blog was named! It's going to be a challenge to come up with something intelligent to say about one of the most discussed films of all time, but that's what makes it so fun. Judging by all the creative and talented folks I've met hanging out at the True Classics blog, I know that my fellow bloggers are going to meet this challenge and then some. 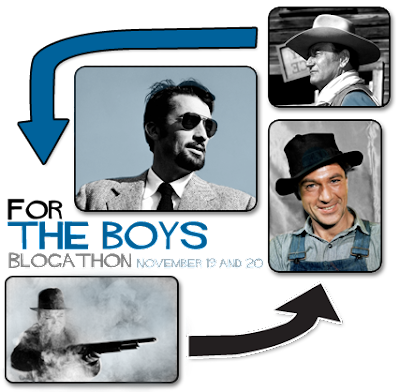 The For the Boys Blogathon (November 19th-20th, 2011), Hosted by Katie and Hilary at The Scarlett Olive Podcast


"There’s a staggering amount of estrogen in our blogs and podcasts. We’d like to shake the content up a bit and expand our masculine audience. Many classic films fall under the manly umbrella: shoot-‘em-up westerns, shadowy noir, timeless war tales, and action-filled gangster ploys. Females are capable of enjoying these types of films, but we feel they were primarily geared towards men. So, here is what we ask of you:
Guidelines/Rules:
Write a blog (or podcast) regarding the masculine gender in film, genres that appeal to men, films in these genres*, or a combination of any of the above. If you are male or female and disagree with this completely … write about that!"

This is probably the opportune moment to admit that The Magnificent Seven is my holiday film of choice. Something about that thumping Elmer Bernstein score just gets me in the right shopping/decorating/snuggling mood. So I'm really looking forward to this manly blogathon. I have the feeling that this one's going to generate a lot of conversation and debate. 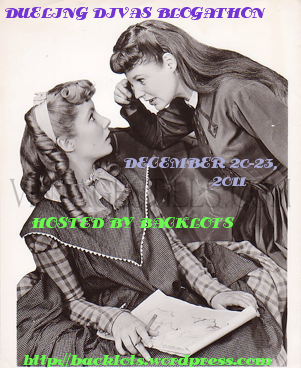 
"I am hosting the Dueling Divas Blogathon, which I have scheduled to take place between December 20-23. It’s a ways off, so as to leave enough time to plan your blogging schedules accordingly. Participants may blog about any of the following types of Dueling Divas:

It’s totally free reign, you can write about the divas themselves, compare and contrast one of each of their films, and if you’re going to write about dual roles, you can talk about the differences in their characters or the actor’s technique in portraying them…you get the idea."

I think this wins my vote for the Best Blogathon Name this year; it just rolls off the tongue. There's a lot of exciting possibilities for this one: evil twins, backstage feuds, hair-pulling fights. How can you resist? 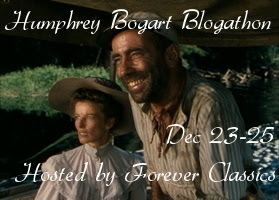 "As most of you probably know by now, Humphrey Bogart is my favorite actor. In honor of his 112th birthday on December 25th, I've decided to host my first blogathon, which will run from December 23-December 25th. I realize that's it's three months away, but if you'd like to participate, I ask that you let me know by December 22nd. Your post can be about his films, his life or anything else Bogie-related."

Bogie really is the best medicine for those holiday blues and chills. What better way to celebrate the birth of Christ than to re-watch Bogart pistol-whipping a few bad guys? Is there a better hymn to brotherly love than The Treasure of the Sierra Madre? I don't think so.  Let's set aside some time this holiday season to celebrate one of cinema's greatest actors.
Posted by Aubyn at 6:56 PM