The Classic Film Survey (from Frankly, My Dear) 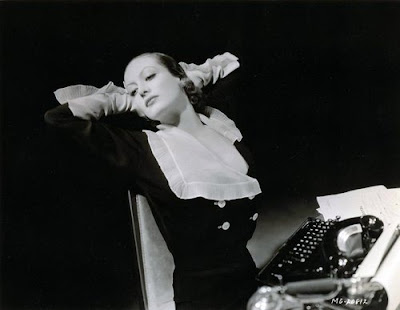 I know I'm incredibly late on this one, but the fantastic Rianna over at Frankly, My Dear has come up with a new fifteen-question movie meme. Rianna's always been a thoughtful and generous commenter for this blog and I love reading about her own cinematic enthusiasms. So, I'm just going to push up my sleeves and answer this one, tardiness be damned. Anyone who's interested, go over to Rianna's blog and give a link to your answers as well.

Looking back on it, it's a toss-up between Fantasia and Sleeping Beauty. I haven't seen Fantasia in ages but it was the film that really got me started on classic music as a kid and I loved it even then.  It's ambitious and complicated and it lets you see the best animators in the world just feeling their way through some of the greatest scores ever written. But Sleeping Beauty just has such an elegant animation style and the use of Tchaikovsky is perfect and the villainess is unforgettable. Granted that our main heroine has no personality (even by classic Disney heroine standards) but she has the beautiful voice of Mary Costa to make up for it. 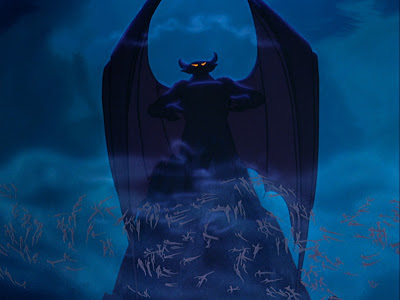 Surprisingly, this one didn't take me that long to decide. Ninotchka, definitely. How can you resist Garbo laughing? And getting drunk on champagne? And buying hats that look like this? And falling for Melvyn Douglas while he rambles on about snail sex (I'm not kidding about that one)? But aside from Garbo's magnificence, it's witty, it's romantic and it gives me a high every time I watch it.

I know I should give the nod to My Man Godfrey or To Be Or Not to Be, as the high water marks of Lombard's comic brilliance. But my heart belongs to Nothing Sacred and Lombard and March circling each other for a knockout punch. And Carole looks heart-stopping in Technicolor. 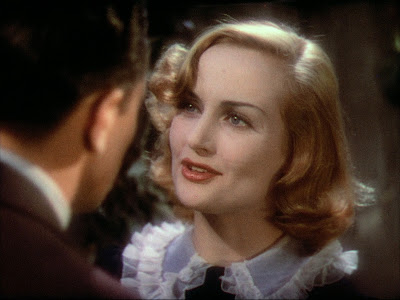 4. Favorite off-screen couple? (It's ok if it ended in divorce.)

It's the rule of Hollywood romance that the best marriages are the ones you hear least about (with the obvious exception of Paul Newman and Joanne Woodward). Being of a house cat temperament myself, I tend to like the stable, long-lived romances like Frances Dee and Joel McCrea or James and Gloria Stewart. But to my own astonishment, after reading Lee Server's excellent Ava Gardner biography, I got really caught up in the romance of Frank Sinatra and Ava Gardner. In real life, I would have been scared to get within a hundred feet of their plate-throwing romance. But on the page, they broke my heart. Those crazy, mixed-up kids, they really loved each other rotten. 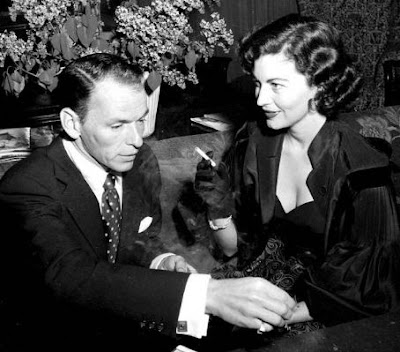 I don't like to poach on Laura's territory, but for me, the friendship between Peter Cushing and Christopher Lee just warms my not-so-frostbitten heart. I'll let Christopher Lee sum it up:


"I don't want to sound gloomy, but, at some point of your lives, every one of you will notice that you have in your life one person, one friend whom you love and care for very much. That person is so close to you that you are able to share some things only with him. For example, you can call that friend, and from the very first maniacal laugh or some other joke you will know who it is at the other end of that line. We used to do that with him so often. And then when that person is gone, there will be nothing like that in your life ever again." 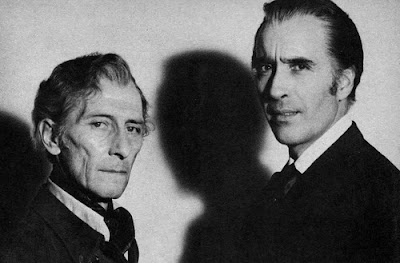 6. Favorite actor with a mustache?

Well there's Clark Gable of course and Vincent Price and Don Ameche and others. But since I already mentioned Ninotchka, I can't resist slipping Melvyn Douglas into this slot. Hardly anyone's idea of a cult actor but the man deserves more respect. Dry-humored, intelligent, and quite the gentleman in real life. He also gave us Illeana Douglas, an actress who follows the family tradition of being quietly excellent wherever she is. 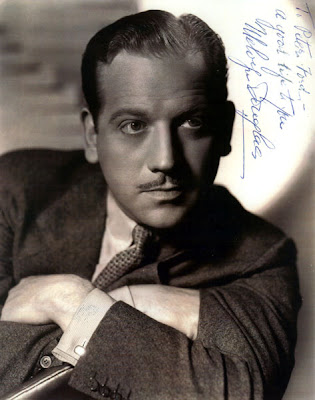 Dammit, all these favorite actor/actress questions are going to have me waking up at 3AM in a cold sweat, muttering to myself. So please bear in mind that my answers are subject to change and whim. Honorable mentions go to Meryl Streep, Simone Signoret, Jean Harlow, Angela Lansbury, and Veronica Lake. And Joan Bennett, even if she technically becomes a favorite once she hits her brunette stage. But today, I'll give the honors to Kathleen Turner. The woman who gave one of my all-time favorite performances in Romancing the Stone. Still sexy, still ballsy, and still completely unlike anyone else. 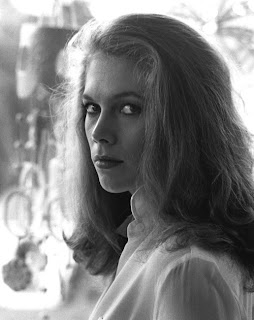 Actual favorite pre-code is It Happened One Night but I'm going to say The Bitter Tea of General Yen in the hopes that more people will see it. Bizarre, beautiful, and unique film. 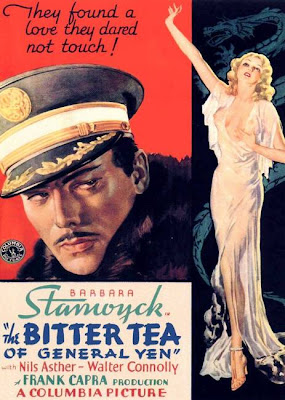 9. Which studio would you have liked to join?

This really depends on era for me. If we're talking early 30s, then it's glitzy, ditzy Paramount all the way. In the 1940s, I think my sentimental fondness is for that ambitious upstart 20th Century Fox. By the 1950s though, I'm hightailing it to United Artists (well before Heaven's Gate appears on the horizon). One thing's for sure, I'm staying far, far away from Columbia and the dreaded Harry Cohn.

10. Favorite common on-screen pairing that SHOULD have gotten married?

I don't know about "should," but I sometimes wonder if Henry Fonda and Barbara Stanwyck might have been better for each other than the people they actually married. 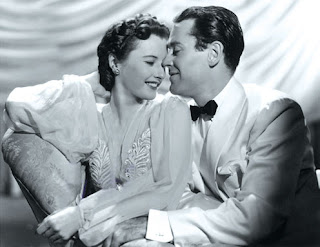 I'm really, really tempted to lie here but I never watched it enough to really bother with favorites. Let me recompense you with a picture of Lucille Ball looking gorgeous.

What a line-up! I'm imagining it sort of like the Kentucky Derby now, with the two Hepburns and Bergman battling it out in front of the pack. A tough race to call, but ultimately, I think my loyalty lies with Miss Katharine Hepburn. The most maddening of them all, in every sense of the word. 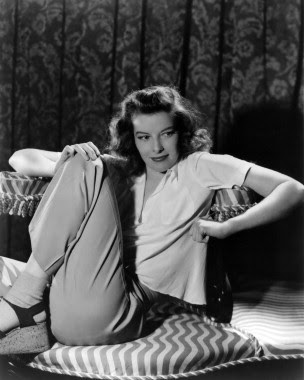 
There's some musicals I'd hate to give up but for me, film noir is, to co-opt Humphrey Bogart's words, "the stuff that dreams are made of."
14. Actor or actress with the best autograph (photo preferred)

I never pay much attention to classic film star signatures (except to pause and mourn the slow death of beautiful cursive writing), but I have to say, I love Gloria Grahame's looping G's. 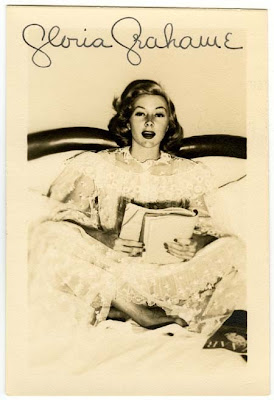 15. A baby (or childhood, or teenage) photo of either your favorite actress or actor (or both, if you'd like.)

Here, have a picture of Jimmy Stewart on a tricycle. 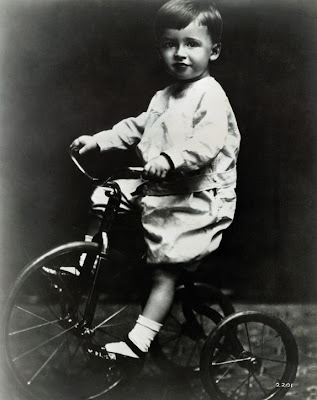 Thanks so much for the meme, Rianna! I enjoyed this a lot.
Posted by Aubyn at 9:04 PM