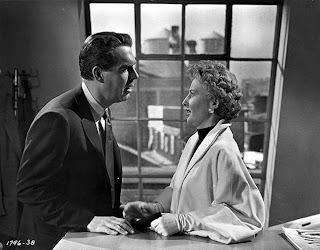 There's Always Tomorrow (1956)
directed by Douglas Sirk, starring Fred MacMurray, Barbara Stanwyck
Ah, the fifties. Cozy suburbs, white picket fences, Father Knows Best, happy housewives with pearls and vacuum cleaners, blinkered optimism, conformity, and the worship of the bland.
God, can we put that stereotype to rest? A casual glance at the movies of the time shows that the men and women of the fifties were restless, questioning, and sophisticated. Off the top of my head: Rebel Without a Cause, Imitation of Life, Written on the Wind, All that Heaven Allows, Peyton Place, Picnic, Bigger than Life, A Place in the Sun. And that's just a handful of the films of that time that take a microscope and tweezers to the American Dream. Including of course, today's film, There's Always Tomorrow.
Cliff Groves (Fred MacMurray) is a successful toy manufacturer, married to the lovely Marion (Joan Bennett), and living in a big California home with their three children: teenagers Vinnie and Ellen (William Reynolds and Gigi Perreau) and little Frankie (Judy Nugent). Cliff is a genial man, fond of his family, but feels that he has become stuck in a rut. However, it is impossible to communicate this to his family. His children are uninterested in him, except as a source of money, and his wife doesn't understand why her husband feels the need to take her out on her birthday or to get away from the house. Then suddenly one night, as Cliff is eating dinner alone, wearing an apron and sitting in darkness, a woman from his past (Barbara Stanwyck) appears in the doorway. 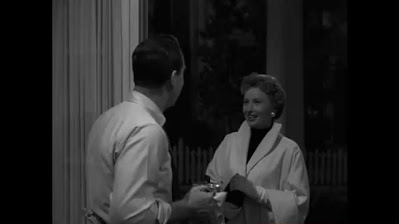 Stanwyck plays Norma Vale, once Cliff's co-worker in the toy business, now a proud and independent fashion designer in New York. She's arrived in town and is eager to catch up with her old friend (and the former object of her unrequited love). They spend an evening reminiscing about old times and roaming around Cliff's factory. Cliff is energized by Norma's interest and their shared fondness for the past and when he runs into her again at a resort out of town, he takes the opportunity to do all the things he hasn't done in years: swimming, horseback riding, and just generally having a good time. However, by chance, his square-jawed, scowling son Vinnie happens to see them together at the resort and instantly concludes that his father is having an affair. He enlists the help of his girlfriend Ann (Pat Crowley) and sister Ellen to do battle against what he fears is his father's mid-life crisis. Meanwhile, Cliff is beginning to realize the emptiness of his life and turns more and more to Norma for solace. 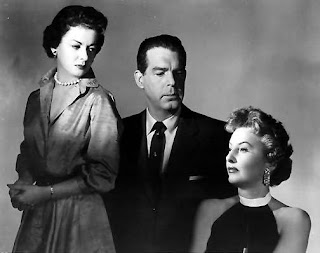 One look at the movie still above gives you a fair idea on what kind of movie There's Always Tomorrow is supposed to be: the happily married couple allied against the homewrecker. In Douglas Sirk's hands, however, the film becomes a bitter, achingly sad story about a man trapped in a life that is suffocating him to death. The reviews of the time summed it up as a "sudser" and  "soap opera" which puzzles me a little since most soap operas have a lot more plot than this film, where most of the action takes place within the character's minds, within their changing views of each other. In comparison to Sirk's other films, this one is more like a chamber piece, shot in beautiful, gloomy black-and-white that turns a large suburban house into a Xanadu-like prison. 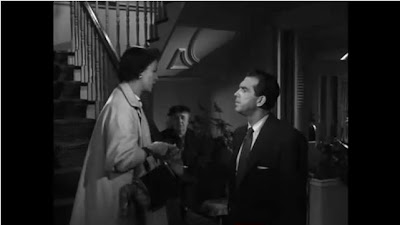 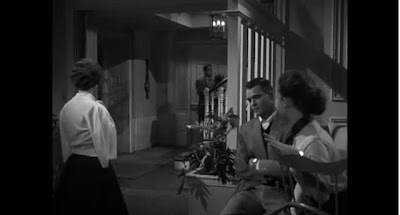 Fred MacMurray and Barbara Stanwyck had been teamed three times before (Remember the Night in 1940, Double Indemnity in 1944, and The Moonlighter in 1953), so when Stanwyck appears suddenly in the doorway, the history between them is palpable. I can't speak for The Moonlighter, but the other MacMurray/Stanwyck films have a weird kind of continuity between them, despite all being of wildly different genres. Remember the Night is straight romance, Double Indemnity is noir, and There's Always Tomorrow is melodrama, but in each film, there's a push and pull with Stanwyck as MacMurray's corrupting influence, tempting him away from the straight and narrow but at the same time, freeing him to do things he's always wanted to do. 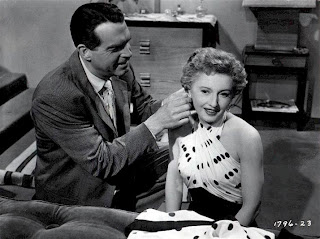 It's become standard to say that Fred MacMurray was never better than when he was playing a heel, and it's hard for me to argue with that since both Double Indemnity and The Apartment are two of my all-time favorite movies. In this movie however, he does an excellent job portraying a more shaded good guy, a man who works so hard to conceal his own bitterness that he himself is blind to it until Stanwyck shows up. In order for the film to work, Cliff has to be sympathetic enough that his children's suspicions of his adultery seem outrageous and later, when he really does start to fall for Norma, he must still retain that sympathy. Yet MacMurray manages it. His best moments are in the details, as in a scene at the beginning where Norma asks him if he is happy and Cliff, a beat too late, breaks into a smile and says, "Sure, I'm happy." Or in a later scene where the restless Cliff irritably snaps out his newspaper to cover up the sight of a family portrait where he is conspicuously absent.

Barbara Stanwyck's character is a little more ambiguous in that we never quite learn the depth of her feelings for Cliff. Norma starts out as the fond old friend, gushing over Cliff's achievements and encouraging him to have a little fun. Then, as Cliff's suspicious children begin to circle around them and Cliff begins to ask for more and more time with her, Norma starts to vacillate. She admits that she loved Cliff twenty years ago and the intensity of his response to her now seems to touch her. But does she really share his longing? We see Norma at her own busy store (unlike Cliff's nearly empty warehouse, she's surrounded by people), fully in her element in a way that Cliff never is. Cliff's wife Marion at one point suggests to him that Norma is obviously very lonely, but Stanwyck's performance has an intelligence and impatience with sentiment that defies any cliches about love-deprived career women. "You have a wonderful life with Marion and the children," Norma tells Cliff, as if trying to convince herself as well as him. Then suddenly she straightens and the old, Stanwyck-style snap comes into her voice. "And I too have a life." 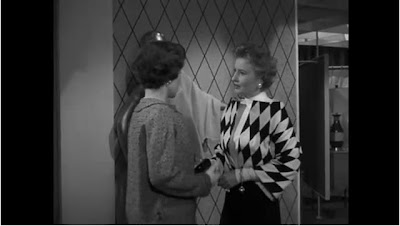 The other third of this triangle is Cliff's wife Marion, played by Joan Bennett, and let me get one thing out of the way right now. I will never forgive 1950s Hollywood for turning Joan Bennett from this: 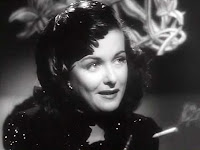 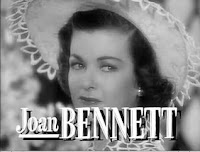 Gorgeous, sexy Joan, why on earth did they start putting you in mother roles? There's a moment in this film that hurts me, when Norma tries to persuade Marion to take home a stylish dress, one of Norma's designs. Marion comes out in a black and white number that suddenly reveals Joan Bennett's slim shoulders and tiny waist and then Marion smiles and says, "I'm afraid it's much too youthful for me." 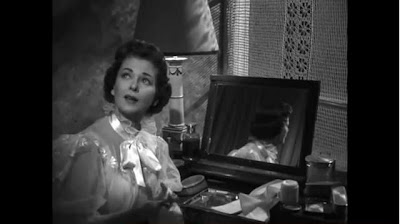 Her character in this film is a miracle of smiling, maternal equanimity. Nothing can shake this woman from her state of torpor. Whenever she says something, she oozes understanding. After a passionate speech from her husband about how he feels just like a wind-up robot, working only to pay the bills, Marion says, "I know it's expensive, with the children, but I do try." Whenever Cliff does seem on the verge of getting through to her, one of her children calls and she rushes off to soothe them. Unlike the energetic, wide-awake Norma, Marion is constantly shown snuggling into bed or saying how sleepy she is. I kept hoping those invitations to sleep (delivered in Bennett's still sexy, knowing voice) might turn into something else but no dice. Marion is a puzzle. What is her inner life?


Movies that strike out against the rules and regulations of the comfortable suburban life usually have a Greek chorus of naysayers and society watchdogs that try to herd the rebels right back into respectability. It was a surprise for me to look back at this film and realize that said chorus is entirely absent from this movie. There are no snooty friends with teacups, no businessmen with briefcases, no outsiders at all. The voice of repression comes not from the outside but from the inside, as Cliff's children come to the conclusion that Norma is a threat that must be neutralized.

These children are just abominable. Cliff's relationship with them can be read in one brilliant sequence where he comes home only to be shushed by the glare of his teenage son, talking on the telephone. Later, as Cliff tries to talk with them, they find various excuses to get out of the house, only pausing to hit him up for money. Of course, if ignoring your parents was a crime, I'm sure most of us would have earned a stretch in the pen. It's when they jump to the conclusion that Cliff is having an affair that they really begin to be horrible. For all their hand-wringing, it's clear that they're actually revelling in their own suspicions. There's a suppressed thrill to their snooping on their father and their whispered conferences on what to do about the situation, like they're playing out a spy game. When Vinnie's girlfriend questions his actions, he snaps that she doesn't know the ways of the world, but it becomes evident that Vinnie himself isn't too clear on just what these ways of the world are.
Without spoiling the ending of this film, let me just say that it is one of the most depressing Code-mandated "happy endings" that I have ever seen. Sirk was a master at subversion and this film is no exception, taking what could have been a simple tale of a middle-aged man's attempt to regain his youth and making it utterly heartbreaking. 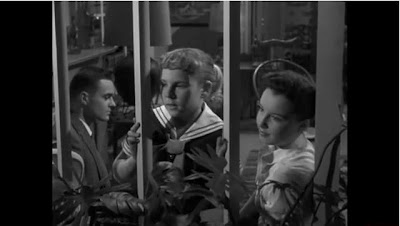 "Love is a very reckless thing. Maybe it isn't even a good thing." 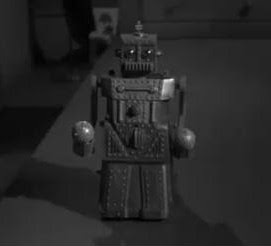 Cliff takes Norma into the deserted factory to show her around. This is the only place he has, outside of his home. After some conversation and much oohing and ahhing on Norma's part, they come to his latest toy, Rex the Robot. Rex walks stiffly down the table, with the sing-song chant:
I'm Rex. The robot.
The mechanical man.
Push me and steer me wherever you can.
Norma and Cliff laugh and move on to an old toy they designed together twenty years ago, a musical toy based on an old organ grinder they'd seen years ago. It brings back good memories even if they only ever sold two copies. Norma can't remember the song so Cliff turns a crank and the music begins, a tinkly version of "Blue Moon."

Their faces light up and if you know the lyrics to "Blue Moon," you know then exactly what Norma will come to mean to Cliff. And if you glance over at Rex the Robot, his latest toy, you know what his future will be.

Haunting, sharp-edged story of discontent
Posted by Aubyn at 10:57 PM