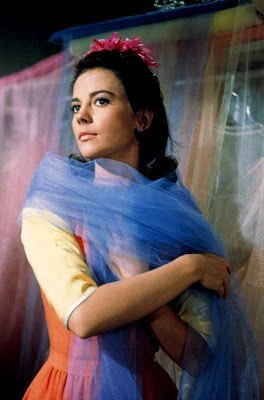 So...dear readers. It's been three weeks since my last post and for me, it feels like three years. My absence had nothing to do with my feelings about blogging, classic movies, or my fellow bloggers. It had everything to do with my personal life, my family, and some major upheavals that have been going on (and are still going on) throughout these last few weeks. Even if I'd had the time, I'm afraid I had little spirit for blogging.

I can't promise that it will be smooth sailing from here on in. Quite frankly, I think my participation in the blogosphere is going to be somewhat erratic for awhile. Never fear though. I have no plans to desert this blog. It means a lot to me to have this as my escape from everything else right now. I still love talking about movies and I still love talking to all of you.

With that explanation out of the way, I thought that now would be a good time for another edition of my Favorite Movie Costumes list. This is an ongoing series where I gush over five of my favorite costumes from classic film. I'm doing it in the same format as last time, with the same three restrictions.
Get it? Got it? Good. Let's begin.


1. Bette Davis in The Letter
Costume Design by Orry-Kelly
("The Lace Veil") 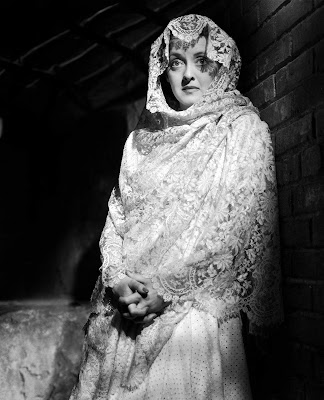 I'm not sure who had the idea to put Bette Davis in a veil for one of The Letter's most memorable scenes (Orry-Kelly? William Wyler? Davis herself?), but it was a brilliant touch. During one unnerving, near-silent sequence, Davis' character Leslie goes to buy back the crucial letter from the Eurasian wife (played by Gale Sondergaard) of Leslie's former lover. The same lover that Leslie had killed. The women meet face to face in a standoff as cold and tense as any Western shootout. The addition of the veil makes an already mesmerizing scene even more heavy with meaning. There's the mocking evocation of a bridal veil (note that Davis kneels before Sondergaard). It's a bitter joke of course; Leslie is the illicit lover and far from innocent. There's the way the deceptive and repressed Leslie is veiled while the openly enraged Sondergaard appears with her hair scraped back and every muscle in her face visible. There's the connection to Leslie's character and her own obsessive lace making. But above all else, it makes for a beautiful image in one of Wyler's most visually stunning films.
2. Joan Bennett in Scarlet Street
Costume Design by Travis Banton
("The Raincoat" and "The Black Gown") 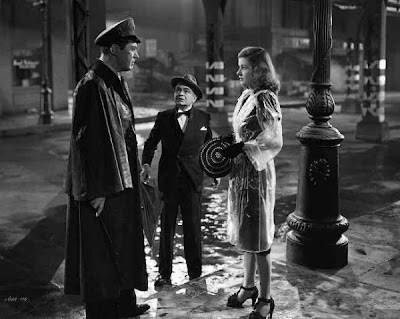 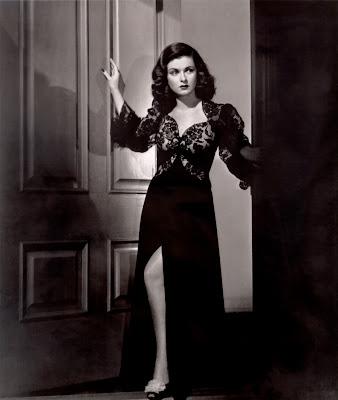 Okay, I'm cheating here and listing two costumes from the same movie. But I can't help it. I absolutely love the first sight we get of Joan Bennett in that transparent raincoat. It's cheap and sexy, exactly right for the character of Kitty "Lazy Legs" March. Kitty, a masochistic prostitute with little brains and no heart, is one of the most wonderfully nasty femme fatales ever put to film. Appropriate then, that she first appears to us in an outfit that puts everything on display, without being too overt about the nature of her profession. And I dig her little striped handbag; it looks like a giant bonbon (a reference to her character's love of candy). However, while the raincoat is a more iconic image, I can't leave Scarlet Street, without putting in a word for Joan Bennett's black gown. That one wins for sheer sex appeal. Hell, just check out how closely Travis Banton skirted the lines of Code-approval with that bodice. And that slit skirt. Every femme fatale deserves at least one dress this seductive.


3. Barbara Stanwyck in The Strange Love of Martha Ivers
Costume Design by Edith Head
("The White and the Black") 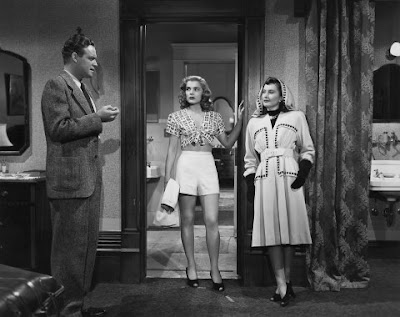 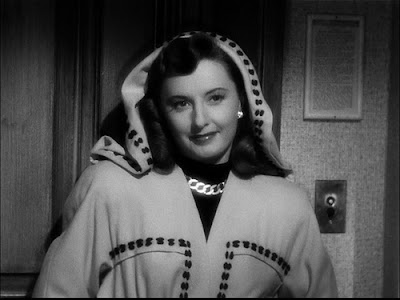 And speaking of femme fatales (I guess I'm in a film noir mood this week), I want to put in a mention for one of my favorite Barbara Stanwyck characters, the complex and conflicted Martha Ivers. Martha's one of the more unusual femme fatales out there because we actually get to know her backstory and why she acts the way she does. She's a vamp, sure, but she's also tormented by guilt and the lust for power. She longs to return to her more innocent past (as personified by her childhood love Van Heflin), but it's clear she doesn't know how to be that girl anymore. She's the Lady Macbeth of femme fatales.

Edith Head designed Stanwyck's wardrobe for this film and Stanwyck looks smashing throughout but there's one moment that just makes me catch my breath every time. And that's the scene where Martha, encased in this smart black and white outfit, arrives at Van Heflin's hotel room. Lizabeth Scott (as his girlfriend Toni) is playfully showing off her figure for her man, but the minute Martha appears, the air is sucked from the room. Stanwyck appears almost snakelike here, her hands covered in long black gloves, her neck hidden, a hood over her hair; she looks every inch the predator. And the way that black detail marches up and down the lines of her dress, like a line of factory-approved rivets (Martha controls the town's industry). It's dramatic, it's stylish and it proves that a lady can walk in, all covered up, and still steal your man.
4. Deborah Kerr in An Affair to Remember
Costume Design by Charles Le Maire
("The Orange and White Chiffon") 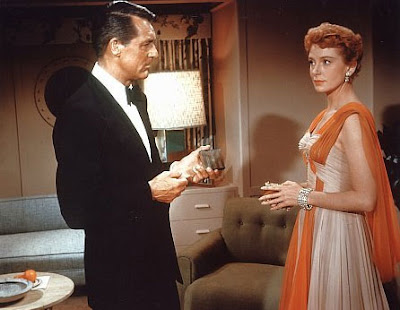 Anyone remember all those times in the Anne of Green Gables books where Anne Shirley would go into a fit of melancholy because she was a redhead and couldn't wear pink? Too bad she never got to take a look at An Affair to Remember because in this film, Deborah Kerr breaks all these so-called redhead rules and blazes out gloriously in pink, red, and orange. And don't we love her for it! (Although for my money, she should have steered clear of the taupe. But nobody's perfect). My personal favorite is this gorgeous orange and white chiffon gown. The unusual work on the bodice, the elegant drape of the fabric, the striking color...it all combines to make one fascinating dress. I'm not sure what budget Terry McKay the singer is supposed to be working with, but who could question a woman so stunning? 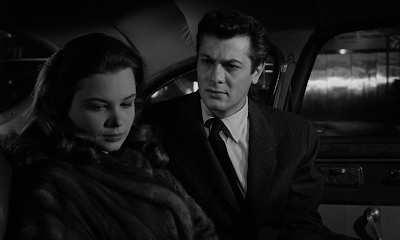 "This coat is your brother. I've always hated this coat."
Poor Susie Hunsecker, trapped by her sadistic, controlling brother, just as she's trapped by this luxurious, oversized fur coat. As the night runs long in New York City, Susie walks around town in a coat that makes her look like a little girl playing dress-up. This is a case not just of what a character wears but how they wear it. In Susie's case, you only have to watch how Susan Harrison buries herself in that fur, the way it slips off her shoulders. All Susie wants is her independence and her love, but she'll have to fight for it. This is one bit of costuming where you can instantly imagine the backstory. No doubt J.J. Hunsecker gave his sister this coat after she told him she was tired of being treated like a little kid. Ostensibly to prove that he knew she was an adult, but really because he enjoyed watching her struggle with something that didn't fit her, making her look more like a child than ever. The moment when Susie finally, decisively, gets rid of this coat is one of the most triumphant costume changes on film.

P.S. Five points for anyone who spots the Danny Kaye reference.
Posted by Aubyn at 12:26 PM