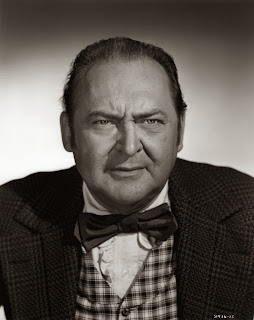 (Note: This is my entry in the What a Character! Blogathon, hosted by Outspoken & Freckled, Paula's Cinema Club, and Once Upon A Screen.)

Nowadays, the Hollywood rule for greedy businessmen in movies is that be you tall or short, slim or round, redeemable or diabolic, you must be shouting into a cellphone. Hence will the moviegoers know you as the face of cold-hearted capitalism. But back in the ‘30s and ‘40s, Hollywood had a different shorthand for businessmen. You had to be fat.

To struggling audiences during the Depression, nothing said money like middle-aged men who seemed to be eating too well. Bankers, politicians, newspaper owners, and factory owners. They were all “fat cats” in the eyes of the public, men gorging themselves on the labor of others. In Hollywood, the portrayal of these men wasn’t always negative. On the contrary, the screwball comedies were full of bumbling, well-meaning businessmen, who could be rescued from their selfish existence. Generally, redemption would come in the blonde, husky-voiced form of Jean Arthur, who would arrive to provide daughterly support and some no-nonsense lecturing (Easy Living, The Devil and Miss Jones, The More the Merrier). Other times though, these men were surface-level sharks, insatiable villains out to grab everything in sight. Whether he leaned good or evil, the businessman archetype was ridiculously popular during those lean years, enough so that a whole class of talented character actors could make a living just from playing him. And of those character actors, for me, the most interesting and varied of the lot is Edward Arnold.

Within the ranks of Hollywood’s fat men, Walter Connolly was the cuddliest, Eugene Pallette was the grumpiest, and Charles Coburn the wiliest, but Edward Arnold always came off as the smartest. Many character actors gain success by having the biggest reactions, the most outsize expressions. And there’s nothing wrong with that, as any fan of Edward Everett Horton, Marie Dressler, Una O’Connor or Eric Blore will tell you. But Arnold’s special talent came from holding just a little back. When an Edward Arnold character gets bad news, he goes very still, with only his eyes giving away his despair. When the news is good, he responds with a boisterous laugh, but it never takes him long to get serious again. Arnold excelled in playing cool-headed businessmen and politicians, men who were cautious, controlled, and ambitious. A Coburn character could get away with playing dumb but Arnold couldn’t.

Even in the part of the bumbling millionaire in Easy Living, he’s sharp and snappy. Watching him spar with Jean Arthur over compound interest is like watching two trains collide at top speed and then miraculously keep right on going. “I pay eight dollars a month, there are four weeks in a month,” Arthur tells him. “I beg your pardon, madam, there are four and one third weeks in a month!” Arnold counters. “Otherwise we’d only have forty-eight weeks in a year!” “Oh,” Arthur says, her face brightening, “You mean leap year?” Arnold’s face instantly collapses like a sinking sponge cake. “No, NO, I don’t mean leap year!” he shouts, turning a howl of frustration into something that’s almost a sob.

But while Arnold could do comedy, his talents were more often put to use in drama. For Frank Capra, he was the face of ruthless opportunism and in Mr. Smith Goes to Washington and Meet John Doe, he plays essentially interchangeable villains. Capra could never muster up as much interest for his bad guys as his heroes so Arnold gets little to do. Still, he manages to convey the coiled-up cruelty of these men by keeping his body still and his movements subtle, with a predatory gaze from behind his glasses. It’s a rule in Edward Arnold movies that, unlike Clark Kent, Edward Arnold always gets ten times more dangerous whenever he has glasses on. 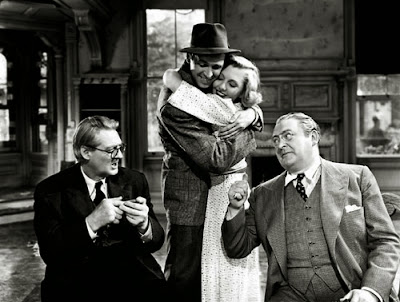 Capra would also use Arnold as the greedy but ultimately goodhearted businessman in You Can’t Take It With You. This is a movie I find hard to stomach. It’s one of those leaden confections where obnoxious free spirits run around following their dreams and turning up their noses at people who try to do dull things like paying bills. But Arnold, who is the closest thing the movie has to a real person, managed to sneak one genuine laugh out of me. During a chaotic dinner party, Arnold’s wife gets jabbed over her spiritualism by a clueless Spring Byington. “Everyone knows spiritualism’s a fake!” Byington says. “Now, Penny, you’ve got hobbies of your own,” Lionel Barrymore reminds her. “Yes, but not silly ones!” Byington answers innocently. Arnold’s been looking like grim death the whole evening, but at this remark he lifts his eyes up and suddenly beams like a blissful baby.

In repose, Edward Arnold’s face was ordinary, but watch him smile and the features turn into a sharply angled geometry problem. The nose is a positive beak; you could imagine Arnold elbowing aside Burgess Meredith to play the Penguin. The eyes squint into specks while the mouth curls up until it almost disappears under the nose. If he’d wanted, no doubt Arnold could have parlayed that expression into a character actor’s trademark, but his overall demeanor was too serious to caricature. 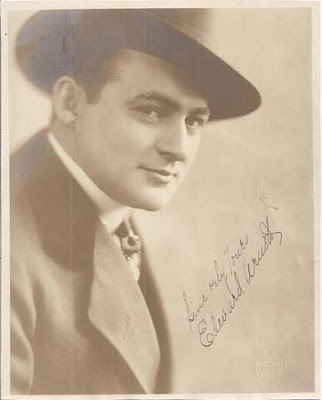 The image of Arnold that’s been passed down to us is the stern businessman, but take a look at Edward Arnold when he was young. You could imagine that man playing Lorenzo in Merchant of Venice, which was actually Arnold’s debut role. The part must have made a great impression on him, because he titled his autobiography Lorenzo Goes to Hollywood. I’ve always loved that little detail, which gives you some insight into Arnold’s mind. No matter how many greedy fat cats he played, he still saw himself as the young man under the stars, whispering poetry into the ears of his beloved.

By far my favorite Edward Arnold role is his turn in The Devil and Daniel Webster, playing the courageous and eloquent Webster to Walter Huston’s Devil. Originally Thomas Mitchell was going to play Daniel Webster and while Mitchell was a superb performer, I can’t help but think his take on the part would have been much warmer and more approachable than Arnold’s. Arnold is certainly boisterous and fun-loving as the beer-swigging orator, but there’s a calculating glint in the eye that never goes away. When he says, “I’d fight ten thousand devils to save a New Hampshire man,” there’s nothing folksy about it. It’s cold and quiet and utterly resolute. Our first glimpse of Arnold is of a tired man scratching away with his quill in the dark, while the Devil’s voice whispers in his ear. Arnold’s face betrays how tempted he is to abandon principle for power. It’s a moment that adds a measure of depth to every scene afterwards. No matter how hail-fellow-well-met Webster acts, he is still fundamentally alone, trying to help people more inclined to worship him than treat him as an equal.


Arnold had a gift for tackling long, weighty speeches and making it seem easy. The Devil and Daniel Webster shows him at the top of his form, but if you want to watch him in a game of serve-and-volley dialogue, look no further than Von Sternberg’s 1935 adaptation of Crime and Punishment. Next to a prickly, tormented Raskolnikov (played by Peter Lorre), Arnold is a smoothly confident Inspector Porfiry. Lorre speaks slowly, his eyes haunted, while Arnold plays the detective with an air of boundless good cheer, as if he’s genuinely enjoying his quarry’s company. The movie was disowned by Von Sternberg for being a routine assignment with little feel for the source material, but Lorre and Arnold are still a pleasure to watch.

In a long and prolific career, Arnold did get some interesting lead roles, although they were rarely in top-flight films. In Come and Get It, Edward Arnold plays the part of yet another greedy businessman, except this time we get to see his character develop. He goes from being a boisterous lumber man to a dissatisfied tycoon, hopelessly trying to recapture his youth. In the first half of the film (by far the better half) Arnold is overshadowed by Frances Farmer’s throaty, wistful bar singer. But an odd thing happens. When the movie gets duller and the pacing begins to lag, Arnold actually gets better. As his character tries vainly to recreate his lost love in the form of Frances Farmer’s identical daughter, Arnold manages to make a creepy, unpleasant man seem genuinely tragic. 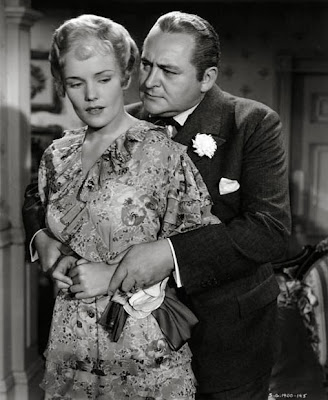 While Arnold could carry a film, I feel like his particular brand of underplayed scene-stealing is most interesting when it comes as a surprise. Take a run-of-the-mill assignment like 1941’s Johnny Eager. In Johnny Eager, Arnold nearly gets sidelined by all the compulsively watchable antics of his costars. When you’re in a movie with Lana Turner as a sociology student falling into madness, Van Heflin tossing out drunk Shakespeare quotes, and Robert Taylor telling all the ladies in the audience that he’s bad, oh yes, he’s never known love and no woman will ever find a way into his heart, you could be turning cartwheels in the background and still not get noticed.

Arnold gets the unenviable role of the good-guy D.A., who tries to keep his stepdaughter Turner from falling into the clutches of Taylor’s womanizing gangster, only to end up blackmailed and broken. But he still manages to add a few interesting touches. In a scene with Taylor, Arnold snaps, “Remember what I told you, thief!” Arnold lingers on the word “thief” as if it’s the worst sobriquet known to man. “You mean ex-thief,” Taylor counters. “Get out, thief!” Arnold barks, more like a cashier brandishing a baseball bat than a dignified D.A. When he orders Taylor to stoop down and pick up a dollar bill, it’s no surprise that Taylor does it, after getting a glimpse of such primal hatred. The D.A. actually becomes more dignified when he becomes powerless and his final scene with the gangster is a flash of pure heartbreak. “My daughter always trusted me,” he says and Arnold pauses to swallow down his inconvenient emotions. “But she doesn’t anymore.” Taylor tersely tells him not to cry. “You’ll not have that pleasure,” Arnold responds, looking back with resigned misery.


If there’s one way to sum up an Edward Arnold character, it’s that he always has total conviction that what he’s doing is the only right thing to do, whether it’s arguing a man’s soul away from Hell or blasting boy scouts with hoses or trying to explain compound interest. I like to think that it was Arnold’s own conviction and determination that shone through in his roles, the conviction of a man who gave his best years to Hollywood and never lost that look of bright, watchful intelligence.
Posted by Aubyn at 11:38 PM