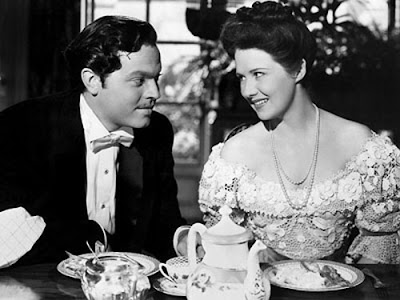 Marriage is like life in this - that it is a field of battle, and not a bed of roses.
~Robert Louis Stevenson
Have you ever been watching a movie and had the sudden realization that those two mismatched characters in the corner were supposed to be married? I'm not talking about bad marriages like the one pictured above, I'm talking about inexplicable ones, the kind where you have to scratch your head, and go, "What could possibly put these two people together, short of a crowbar or an arc welder?"  So, for today, I thought I'd rattle off a few headscratchers. Note that I'm only listing characters that waltz into the film already married, not the ones that get together within the course of the story.
1. Cecil Kellaway and Lana Turner (Nick and Cora) in The Postman Always Rings Twice 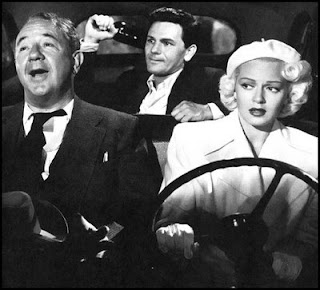 Okay does anyone, even the president of the Cecil Kellaway Fan Club, think for one second that the white-hot Cora Smith couldn't aim any higher than the old, drunken, washed-up owner of a roadside diner? I don't care what kind of mud hole Cora crawled out of, there must have been other options. Hell, Nick doesn't even seem that interested in the woman he married and shows no more awareness of his rival John Garfield than he would of the delivery man. The movie even seems to enjoy piling on the absurdities; Lana Turner is made up and photographed like the Patron Goddess of White Swimsuits and Cecil Kellaway is like an extra that wandered over from It's a Wonderful Life.
Movie's Explanation: Security.
My Theory: Black magic. We learned in I Married a Witch that Cecil Kellaway is an evil warlock and in both films, he gets completely soused. So my take on it is that one drunken night, Kellaway splashed himself and Cora with a love potion and by the time it wore off, Kellaway had forgotten most of his magic spells. Except the spell that does Cora's dry cleaning.
2. Hugh Laurie and Imelda Staunton (Mr. and Mrs. Palmer) in Sense and Sensibility 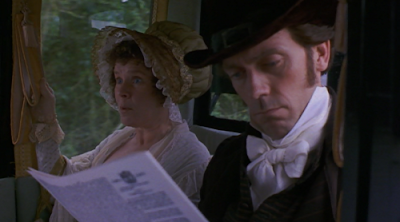 Yes, I know this one comes straight from the book. But, to my recollection, in the book it was implied that Charlotte came with a little money and was young, pretty, and vivacious, making it a little clearer why the sarcastic Mr. Palmer might get carried away briefly. And he can't despise her completely, since they do have a baby pretty quickly. In the film though, Hugh Laurie is just so eaten up with contempt for his wife. "If only this rain would stop," she sighs. "If only you would stop," Laurie mutters, with an expression that says he's one second away from grabbing an axe. Staunton also plays her character pretty broadly, so it's hard to imagine some previous incarnation of Laurie that looked at her with affection. Still, bickering couples are nothing new for film, and I have to admit I enjoy the Palmers, the same way I enjoy Eugene Pallette and Marjorie Main in Heaven Can Wait.
Movie's Explanation: Err, the rule that says there must be at least one mismatched couple in every Austen story.
My Theory: Mr. Palmer, being Hugh Laurie, subconsciously realized that he needed a comedic partner, somebody he could snark about without any fear of her understanding him. Behind that thunderous glare beats the heart of a satisfied comedian.
3. Richard Barthelmess and Rita Hayworth (Bat and Judy Kilgallen) in Only Angels Have Wings 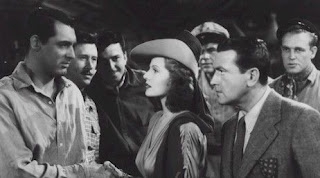 The question isn't so much as to why the gorgeous, tremulous Judy would go for the older but still reasonably good-looking Bat. For what it's worth, Lilian Gish thought Barthelmess had the most beautiful face of any man who ever went behind the camera, even if his looks don't come off to greatest advantage in this sour, scowling part. The problem for me is that Bat is so completely on the course of self-destruction, so self-loathing, bearing the mark of his past cowardice like the mark of Cain. This not a Byronic hero, if anything, it's more like a noir hero. That Judy might decide to look past all that and go for him, okay it's a stretch, but she wouldn't be the first person to marry someone in the hopes of saving him. It's the idea that somewhere in his past, Bat could sufficiently rouse himself from his Slough of Despond to ever take her out on a date. How did this guy convince himself that he deserved Rita Hayworth in his life? Even when he's finally redeemed, Barthlemess still can't work up any renewed enthusiasm for his wife. What matters is what the other fliers think of him, not what she thinks. I'm not giving these two any great odds for the future.

My Theory: Bat was trying to punish himself even more, marrying a beautiful woman and then deliberately denying himself the chance to be close to her. Tough on Judy, though.

4. Katharine Ross and Peter Masterson (Joanna and Walter) in The Stepford Wives 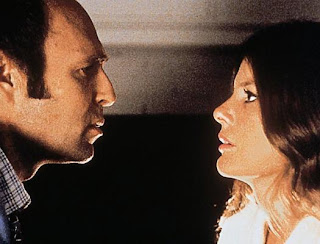 Granted, it'd be pretty hard to make a movie of The Stepford Wives that doesn't make its male characters look like the worst bunch of assholes in the history of assholes. The problem for me isn't that Walter is pathetic or villainous; he has to be both those things for the story to work. It's that from the moment we meet him, he is so completely unattractive in every way and so unaffectionate towards his wife Joanna, that his final act of betrayal carries very little weight. Just look at him sighing longingly after Nanette Newman's cooking abilities or the way he looks at Katharine Ross as if to say, "Oh, you again?" He might as well have a giant flashing sign over his head saying, "TOTALLY FINE WITH TRADING IN WIFE FOR ROBOTIC DUPLICATE." But what brought these two together in the first place? We see Joanna snickering over the idea that one of the fat, balding Stepford men can sexually satisfy his gorgeous wife, so something tells me it isn't Walter's sexual prowess that made her fall for him. Whatever it was, she has more chemistry with Paula Prentiss than she has with him. The creepy power of The Stepford Wives comes from its ability to take a ludicrous, satirical plot and treat it with such deadpan seriousness. However, I have more suspension of disbelief for the robot wives than I have for Walter's powers of attraction.

Movie's Explanation: Any man can be a Walter, if given the choice.

My Theory: None. I really don't know.

So that's four examples, off the top of my head. Anyone else got some?
Posted by Aubyn at 2:10 PM