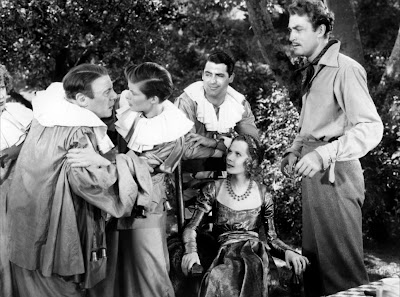 Sylvia Scarlett (1935)
directed by George Cukor, starring Katharine Hepburn, Cary Grant
(Note: This is my entry for the Queer Film Blogathon, hosted by Garbo Laughs.)
One day, young Sylvia Scarlett (Katharine Hepburn) gets an unpleasant shock: her father Henry (Edmund Gwenn) has embezzled from the lace factory and now, there is nothing to do but go on the run. Sylvia convinces her father that the police won't be on the lookout for an embezzler and his son, and with one twist of the scissors, Sylvia becomes Sylvester.
However, just as Sylvia is becoming comfortable in her new identity, her father bumbles into the path of Jimmy Monkley (Cary Grant), a Cockney con artist. Fortunately or unfortunately for the hapless Scarletts, Monkley takes a shine to them and enlists them as his new partners. To Monkley's disappointment, the Scarletts are more of a hindrance than a help until Sylvia gets the bright idea for them to form a traveling player troupe, with the help of a ditzy housemaid named Maudie (Dennie Moore).
While performing, they make the acquaintance of aristocratic artist Michael Fane (Brian Aherne) and his snooty girlfriend Lily (Natalie Paley). Sylvia quickly falls for Michael, who's quite taken with this hot-tempered, free-speaking boy. From there, it becomes a romp of Shakespearean proportions, as Sylvia and her cohorts are quickly entangled in deceptions both romantic and criminal. 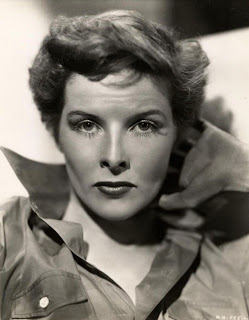 Sylvia Scarlett was one of the more notorious flops of the 1930s. At the time, audiences did not know what to make of the film's strange plot or of Katharine Hepburn in drag. Nowadays, Sylvia Scarlett stands as one of Hollywood's early and more interesting experiments in examining gender roles.

In the film's opening scene, Sylvia, after learning of her father's embezzlement, suddenly decides to pass herself off as a boy. She removes her long braids and switches her luggage label from Sylvia to Sylvester and that is that. The speed of her decision, as well as the enthusiasm with which she goes about it, is the film's first hint that Sylvia's cross-dressing might not be for the reasons she says it is. Her flimsy justification that the police will be thrown off if her father Henry is traveling with a boy and not a girl doesn't really hold water (Henry, it should be mentioned, doesn't make any attempt to disguise himself). And as the film wears on, well after it becomes clear that the police aren't going to catch up with them, Sylvia remains in her masculine identity. 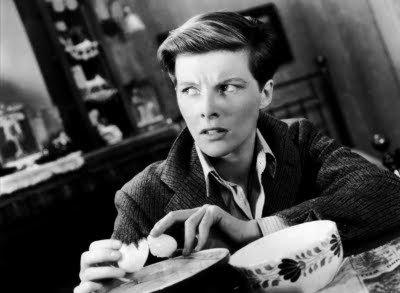 Katharine Hepburn is nobody's idea of a convincing boy, but this is not a film where realism is paramount or even wanted. Hepburn makes some attempt to distinguish the two personalities by speaking in a high-pitched, trembling voice for her scenes as the girl Sylvia. Interestingly, the voice and mannerisms she uses for the boy Sylvester feel a lot more like authentic Hepburn than the girlish ones do; Hepburn's opening scene as the tearful, pigtailed young girl (with an on-again, off-again French accent) plays like parody. It's only when Sylvia dons drag that she feels relaxed and free.

As a boy, Hepburn's movements become easier, her laugh more open. Her attitude changes as well;  the timorous heroine of the opening scene becomes a pugnacious, spirited young man, who's more than willing to take a sock at anyone. Sylvia's performance of being male is clearly tied to her ideas of what being male means. The idea of a woman posing as a man in order to find freedom is nothing new (Shakespeare's heroines are a big believer in it), but Cukor's film adds another dimension to the idea: Sylvia is not only more comfortable as a boy, but doesn't know how to be a girl. This becomes obvious in the second half of the film when Sylvia, having fallen in love with the rakish artist Michael Fane, finally discards her boyish identity in order to woo him. 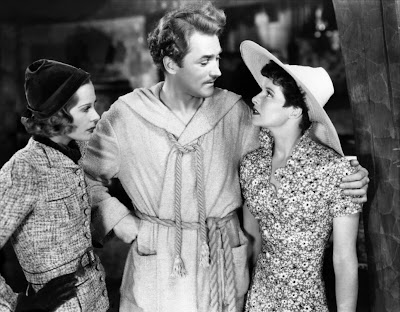 George Cukor later went on record as saying that the film loses interest in its second half when Sylvia goes back to being a girl again. He's right in saying this, but it isn't because the plot becomes weaker or because the character becomes less interesting, it's because Hepburn's performance goes seriously downhill. Her movements are fluttery and exaggerated, she mugs for the camera, and always seems to be on the verge of breaking out in a sobbing or giggling fit. Sylvia the cross-dresser is interesting, but Sylvia the girl is a ninny.

And I don't think this was due to the script, since the character's actions aren't necessarily weaker; she retains the decisiveness and independence of her boy persona (even jumping into the ocean to rescue her romantic rival). It's Hepburn's performance that weakens her. Considering how well Cukor and Hepburn would work together on other occasions, as well as Cukor's reputation as one of the great directors of actors, it's hard to believe that the acting choices weren't intentional. But they made a mistake. After all her experiences, Sylvia should be stronger as a character, not weaker. And considering that the film's other two main female characters are, respectively, the foolish, unfaithful housemaid Maudie, and the snooty, unfaithful society girl Lily, the implications of Hepburn's performance become a little uncomfortable. 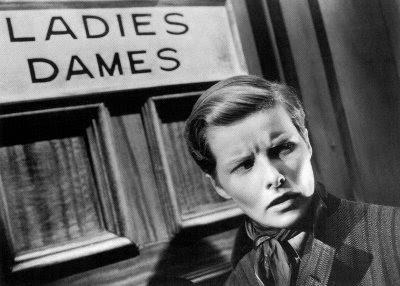 I realize that I've spent most of this review not talking about the plot but in the case of Sylvia Scarlett, the plot is incidental to the antics. Sylvia and her father Henry go from being outlaws on the run to con artists to theatrical troupers, without much difficulty. In spite of the fuss about Henry's embezzlement, there's very little urgency to their renegade lifestyle (the law enforcement doesn't seem to be interested in following them) and much of the action seems to take place on a cloud of pink champagne and gaiety. The characters play a lot of their scenes either drunk or wishing they were. Whenever a new deception is unmasked, the characters respond not with anger, but with delight.

But George Cukor isn't trying to make a serious film about criminals. The fluidity of the way Sylvia can switch gender roles is matched by the way other characters can switch their identities, from criminal to theatrical. In that respect, Sylvia Scarlett might be taken as one of Cukor's more personal films. As more than one critic has noted, Cukor was fascinated by performance and theater, and his films reflect that fascination. Many of them are about the lives of people who perform for a living, as in What Price Hollywood?, Dinner at Eight, Camille, A Double Life, The Actress, A Star is Born, and Les Girls. The cleverness of this film is the way Cukor hints that every role in society is a kind of performance, whether it's your gender or your social class.

Sylvia Scarlett began life as a book by Compton MacKenzie, The Early Life and Adventures of Sylvia Scarlett. Possibly that is why this film, unlike Cukor's more polished adaptations of popular plays, feels rambling and unfocused. Characters switch their minds on a whim, romantic attachments are made and broken with ease, and the atmosphere swings from brightly cheerful to dark and even tragic at times. But it's that same quality that gives Sylvia Scarlett its charm; it's like a traveling companion that can't resist pulling you off the path to come look at whatever new shiny thing happens to catch their eye.

Aside from its examination of gender roles, Sylvia Scarlett is known as arguably the first film where Cary Grant's star persona really began to take shape. Here, he plays a charming, amoral Cockney con man Jimmy Monkley, annoyed by Sylvia but also amused by her. In one of the film's funnier scenes, Grant strips off his shirt and invites "Sylvester" to join a bed with him in the caravan, telling her, "You'll make a proper hot water bottle tonight." But there's an element of menace to Grant's character; Monkley's introduction is straight out of film noir, standing in the fog, his face lit but his body in shadow, staring silently at the frightened Scarletts. After a few altercations, he joins forces with Sylvia and Henry, but makes it clear that he's not going to be bound by any ethical constraints. Even when his con games fail (usually because Sylvia bungles something), Monkley still carries on. Towards the end of the film, Monkley even manages to resolve a love triangle by kidnapping an unconscious woman.

While his Cockney accent is less than convincing, Cary Grant brings all of his talents to the role of Monkley. His charm, his theatrical and acrobatic training, and the ability to make a cad look charismatic. And since it wasn't yet de facto that Cary Grant would get the girl, it allows Grant to play a friendly (and suggestively homoerotic) role in relation to Hepburn. It's certainly their most unusual pairing together. 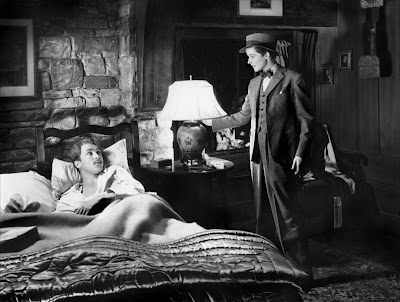 The failure of Sylvia Scarlett at the box office is a shame, because the film is one of the most interesting of its decade. There were other films of the 30s that explored the potential of cross-dressing (Queen Christina and Marlene Dietrich's tuxedos come to mind), but Sylvia Scarlett really does take the premise in fascinating directions. At times, it almost seems like Cukor was drawing on some obscure Shakespeare play. And if the film does start to lose some of its sparkle and energy by the end, it remains as a brilliantly subversive and funny examination of the role-playing inherent in gender, crime, and art. As Shakespeare would have it, "All the world's a stage and all the men and women, merely players."

Favorite Quote:
"Well, we're all fools sometimes. Only you choose such awkward times."
Favorite Scene:
I'm going to cheat a little here, since my favorite scene is more like two scenes melting together. Sylvia, Henry, and Monkley are in the mansion of Maudie's employers. Maudie believes that Henry is a theatrical impresario, ready to sign her on and flirtatiously consents to put on her mistress's jewels for the big audition. But Sylvia, due to a sudden attack of drunken honesty, forces Monkley to reveal to Maudie that they were planning to rob the place, using her. Maudie is shocked and Monkley is about ready to knock Sylvia's block off. But then, just as Maudie is bemoaning her bad luck ("Now, I shall have to stay here, slaving away, instead of performing by the sea") a light bulb goes off in Sylvia's head. "But we must perform by the sea!" she shouts. They could be real performers, they could get a caravan...Monkley shakes her off but Sylvia persists. And then Henry and Maudie join in. Maudie tells them to take her savings. Monkley turns away, trying to resist, and then finally gives in to the carnival spirit. Henry starts up a round of "I Do Like to Be Beside the Seaside." The con artists and their erstwhile victim end up jigging on the staircase because, oh well, why not? The great joy of this film is its upside-down logic. In this world, deception doesn't drive people apart. It brings them together.
Final Six Words:
Sparkling, rambling celebration of crossing boundaries
Posted by Aubyn at 10:57 AM